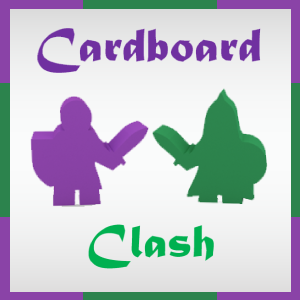 I had posed a few ideas for a Top __ List to cover this month and the overwhelming majority were interested in a solo list. This is, by no means, a definitive list. I finally played Friday for the first time a few weeks ago and my only Onirim experiences have been via the app. I’ve played Mage Knight a grand total of two times, which is the same number as my Terraforming Mars solo plays and one more time than my Scythe plays. Like any list, these are pretty much capable of being in flux at any point in time.

#10 – Chrononauts – This one is going to be one of the bigger surprises on the list. Believe me, I didn’t expect to like this one as much as a solo game. Friday is threatening to knock it out of the Top 10 for me, as I really love a deckbuilder game, but at least for this year I will keep this where I originally planned to place the game. It provides a fun and challenging puzzle, given you have to align the timeline for eight different travelers in the time it takes to go through the deck once. I’ve gotten to 7 of them one time, and most times end with 5-6 getting aligned. This is a hard, fast, rewarding solo experience. I wish it was a little more Doctor Who-ish in feel, which is why I can’t wait to finally get around to the Doctor Who 2nd Edition Solo Game…

#9 – Terraforming Mars – I had my doubts about this as a solo game, but my first two plays have dispelled those doubts. This is a solid game, and one that has a ton of potential for replay. It will feel repetitive to some players because, in essence, you are trying to accomplish the same exact objective every play. The trick comes in how to maximize the usefulness of those cards you get, which is less than half the deck on both of the plays I’ve done. You could probably do a back-to-back session using the rest of the deck for the second game for an interesting and challenging experience. This will likely rise by the end of 2018 once I log more plays.

#8 – Sherwood’s Legacy – I really need to break this one back out to determine where this really sits on the list. It was a really fun game in a tower defense style. I played with the easy rules of ignoring the Wanted system and barely managed to pull it off. It is probably the easiest and least luck-dependent of the three Legacy games from Lynnvander so far, making it a perfect puzzle to play through. I’ve been really pleased with all three of those Legacy games, and this is the game for those who want to be able to plan out their turns in advance to maximize their efficiency.

#7 – Scythe – I really, really love the Automa system that has been implemented in a handful of titles. This one has a fairly steep learning curve for the movement, but I think I got it down and played it right. I squeaked out a win by a single point thanks to an extra turn I hadn’t expected to get – this one will provide a great challenge and variety thanks to the various factions in the base game. I can only imagine how that will increase with the Wind Gambit expansion coming in December. I need to make a point of getting this one back on the table soon because this was a great experience and probably a game that will move up further once I play it some more.

#6 – Yeomen: The 9 Card Agincourt Game – This is a gem of a game that every solo gamer should print out and play. It is fast, challenging, and a lot of fun. There aren’t a lot of things to print and cut, making it a fast thing to get ready for the table. The rules might be a bit of a challenge for the first play, but after a while it really starts to click. This is a fantastic solo game that can be knocked out, every time, in under 15 minutes once you get the game’s rules down. I can’t recommend this one enough – unfortunately, this is probably going to drop hard once Scythe, Terraforming Mars, and others get some more plays at the table.

#5 – Mage Knight Board Game – This is the solo game to end all solo games, or so I have heard. And with two plays logged, I can see the great appeal here. The biggest detractor to this game is the time it takes to setup, play, and tear down the game. There is one other game on this list that comes close to the time, and it has a little easier ruleset and a more appealing overall theme for me. I really love the progression of the character, though, making this my one and only “dungeon crawl” style of game on the list. The former RPG-lover in me craves that kind of experience at times and this one certainly delivers.

#4 – Viticulture: Essential Edition – If you read my review of this one solo, this placement won’t come as any surprise. Actually, it might be a little undervalued. This one was one of two games to really catch me off-guard this year in terms of how much I enjoyed the solo experience (with the other being Chrononauts). Worker placement is really my wife’s mechanic, although I do enjoy playing them. So when this one hooked me completely for play after play, I had to pay attention. Easily the best game to pick up if you want a game that plays well for 1-6 players, and I’ve heard the expansion makes the game experience even better.

#3 – Race for the Galaxy – I think nostalgia for my early years of playing this game solo has it holding on to a higher spot than it deserves; however, it could equally be argued to hold this spot because it is always a fun and challenging experience. This was the game that led me down the path of solo gaming, eventually leading to my decision to get rid of my video gaming systems. In the past year or so since that decision, I’ve found so many great games. Yet I always know that I can grab this one, set it up, and that dreaded robot will force me to fight for every point needed to defeat it. On easy…

#2 – Albion’s Legacy – I will admit that the theme of the game appeals to me far more than it might for others, boosting this game up at least a few slots higher than it might deserve on merit alone. Yet at its core this is still a solid exploration/questing game that provides crushingly difficult challenges every step of the way. It takes some time to set up, but nothing quite as extreme as Mage Knight. This one has a play time of around two or three hours to run through a quest, even though it has a time limit of ten rounds. There is so much Arthurian lore interwoven through this game that it makes me giddy inside every time I play it. Only one theme could excite me more, which leads me to…

#1 – Lord of the Rings: The Card Game – Boom! That is the sound of this list exploding in the past month. I had owned and played this game in the summer of 2016 and eventually parted with it rather than purchase expansion content for it. After all, the Core Set can only be played so many times before it grows stale and begs to be expanded. I reclaimed the game and, since I got it back, I have logged 18 solo plays, taught a friend who then purchased a core set, starting writing a strategy series about the core set, built and rebuilt half a dozen decks, signed up for the 2017 Fellowship Event in December, and agreed to quest regularly in the game with the friend who I taught the game to. I’ve played it five times this weekend and I’m itching to reset and play a sixth time. And I still haven’t expanded the game beyond the core…something that will be changing in the next few days. If I had found the Black Riders deluxe expansion local (or online) then I would have already picked that up because this game is consuming my solo play time in a good way. It is only fitting, after all, that my favorite solo game is a Lord of the Rings themed game. My favorite 2-player game (and by extension overall favorite) is a Lord of the Rings game as well, and I don’t see either of them losing their thrones any time soon. Yes, the Core Set alone has its limits and its flaws. But if there is one game I will gladly dive into for the long haul, it is this one.

A Few Speculations on Games that Could Appear Here in 2018

Arkham Horror: The Card Game would be a very likely candidate to make this list if I picked it up. I imagine it would have the same note as the Lord of the Rings game, in that it needs to be expanded to keep it fresh and interesting. The game takes a different approach than Lord of the Rings while keeping some familiar mechanics and does some great things. It is probably, mechanically, a better game. But theme is king when comparing the two and I just love Lord of the Rings a ton more than the Lovecraftian mythos. But this would very likely be a top five, if not top three game if I picked it up for solo play.

Nations is a game that caught my attention when I played it with two others, and I’ve heard it has a really solid solo play. There are times when you just want to sit down and do some civilization building, and this would be one that I could see contending if I picked it up. The problem is that price tag is too high for the game. If it came with the game and the expansion for $100, I might be convinced.

Lisboa is a game I really loved my first play of. I know nothing about its solo version of the game, but I am nevertheless excited to test it out if/when the game enters my collection. It is a game I was excited about picking up eventually, and knowing that others are enjoying the solo play makes me have high hopes for this one.

Pendragon: The Fall of Roman Britain is a game I have been super-excited for. Being a COIN game, it has a solid system behind it. I haven’t tried a COIN game yet. Not many of them interest me with their theme. However, I have decided that will not prevent me from wanting to pick this up to play alone and with others. Will running three factions via their flowcharts make the experience clunky, or will it provide the fascinating and challenging gameplay that I am hoping for? I hope to find out in 2018, which is when I will realistically be looking to finally snag a copy of this one before it goes out of print.