Thank you for checking review #101 by Cardboard Clash. My aim is to focus on reviewing board games and how they play for two people and, on occasion, how they play for one person. Because my wife is my primary gaming partner, a lot of consideration goes into finding those games that play well with 2 players, and we typically prefer to find those games that do not require a variant (official or otherwise) in order to play it with just the two of us.

**Note: A review copy of the game was sent in exchange for an honest review.

An overview of Gloom of Kilforth

Gloom of Kilforth is a board game designed by Tristan hall that is published by Hall or Nothing Productions. The rules state it plays 1-4 players and has a playtime of 60-180 minutes.

The land of Kilforth is a perilous domain filled with nefarious monsters, mysterious Strangers and treacherous Locations, and dominated at its centre by The Sprawl, a huge city where intrepid Heroes begin their journey to fame and fortune. Throughout the land various factions vie for power over each other, such as the supposedly noble Order of the Rose or the terrifying Doom Guard. And presiding over the world outside Kilforth is the ever-present Overlord, Masklaw. Over the coming month, a deadly Gloom will descend upon Kilforth,which the Heroes must Battle through to prove their worth, defeat an Ancient evil, and save the land from darkness.
Gloom of Kilforth is a card game of high fantasy with a Gothic edge, playable in 1-3 hours, where 1-4 players, working individually or together, must take their humble adventurers on a journey through a dark world of magic and peril. They will visit strange places, stranger people and overcome powerful enemies in their mission to discover mysterious artefacts and mystical Spells. Players follow their Hero’s tale from modest beginnings through an epic story to an exciting climactic battle for the fate of the world. Gloom of Kilforth takes about 45 minutes per player to play. 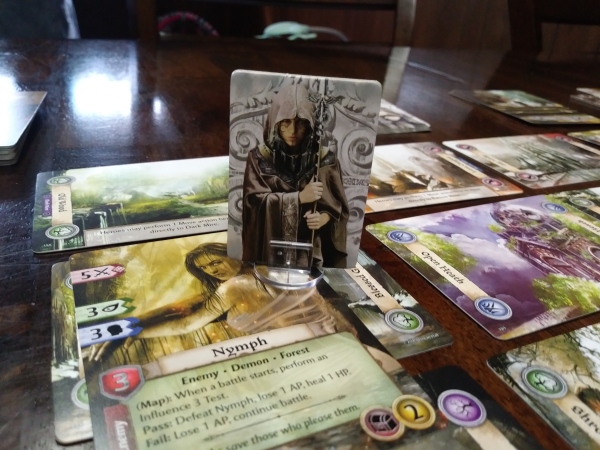 A world map made out of cards is a pretty interesting idea. This not only allows you to have a different layout of locations every time you play, but it also enables something like their Gloom mechanic in this game. We’ll talk about that shortly, but I do appreciate – mostly – the board being like this. My only nitpick comes from the randomness which has, sadly, seen the “travel between” locations end up at most 2 spaces apart from each other. I’m yet to luck into being able to zoom across the board, although there are other ways which can help with movement in the game.

The night phase is an interesting idea, because it adds some additional effect – an event, an enemy/place/stranger to add onto a location, or even weather conditions that are in effect for a certain amount of time (often until the next weather effect) – and sometimes those are things you need to react to or alter your plans around. In addition, there are Plot cards that trigger when a certain type of land falls into Gloom. And finally, those card locations flip over to “Fall into Gloom”, meaning you lose 1 HP if you end your turn on that location. This part of the game provides a good kind of randomness, in the form of something you need to deal with on future turns rather than something to wreck your chance of winning.

I like that your successes on a test remain and you can use several actions to clear an obstacle/place/stranger as you move around. Yes, more actions mean it takes more time to pass through, but this helps offset the randomness of the die rolls. Somewhat. The catch is that if Night comes before you clear it, all those successes get wiped. Sometimes it is worth trying if you have 1-2 actions left for the day. Othertimes those become wasted actions if you fail.

There is ample variety in the box without any need for expansions or adders for the game. With the choice of a class and race combination (and plenty of each to choose from) and eight Story cards to progress through, this has the content to keep me coming back and playing through it time and again without repeating the same adventure.

The artwork, as expected, is incredible. The soundtrack, while entirely too short, is delightful to play while grinding through some encounters in Gloom of Kilforth. I talked about the sensory experience in 1066, Tears to Many Mothers and the same is true here. These are added bonuses to a game that don’t necessarily make a game worse if they are lacking, but they can enhance the experience to a new level when they are properly present.

I enjoy the rewards from clearing a card, although I do wish there was some sort of XP gain for that. First comes the choice between gold or a token from the bag. I’ve had games where those tokens all seem to contain either 1 Gold or Nothing as a reward. I’lve had games where they’ve boosted the number of dice rolled when attacking, reduced damage taken in combat, regained HP, and more. But the best tokens are those which let you move to any location of a type on the map. But since you need 5 Gold to progress along the Story with each step, many times you’re taking that Gold. Then you have a choice of taking that card into your hand, which gives you keywords to discard later or to take a card from the reward deck specified. Maybe that Ally you take will have a keyword you need, too, or will boost a key stat. Sometimes either way you choose is wrong (or right). But I do like having choices.

Those rewards you gain have specific locations you need to be at in order to put them in play. And when it seems like every reward is on the other side of the map – that really slows your progression of power to a crawl (more on this later). If movement across the board was a little faster this wouldn’t hurt so much. And sometimes there are still good things to do along the way. But it can really hinder you to cross a lot of terrain (and potentially run into a few entanglements along the way).

Progressing in the Story requires collecting keywords. Sometimes the keywords are easy, such as Forest. Other times you might be spending 4-5 rounds just trying to find an encounter card that contains the desired Keyword. In a game with a 25-round timer where the map feels so much smaller with each passing round – thanks to the spreading of Gloom – so many of my plays thus far have seen enough stalling out on trying to progress to where I’m scrambling to make enough progress to reach the end.

Maybe I’ve been using poor combinations, but only one play has led to me feeling enough progression of abilities to feel like I scale with the growing threat. There is a lot of ramping up from the game, but the only way you get to improve is by progressing along the Story. In an unlucky streak, you may complete 4-6 different encounters (whether quests, strangers, or enemies) before getting the desired keywords to power up. And it simply lets you gain one more max HP and a new ability. I’ve hit the highest tier only once, and it definitely was a game changer. Yet I wonder, looking back, if that was simply a really lucky play (I didn’t draw into a single enemy from any location deck, which undoubtedly is an unusual thing. Had I drawn enemies, my 2-dice attack rolls would likely have led to that being a quick losing game rather than allowing me to get leveled enough to use my Sneak for Attack on the final boss…)

The game is brutal and punishing and feels downright impossible when combined with the other two points above. I’m all for a challenge. I’m all for trying to learn to overcome the odds and do better the next time. But when so much hinges upon randomness to where you can play perfectly and still lose horribly – that ruins the fun. Case in point, my very last play had a really lucky sequence (drawing no enemies, and the one time I needed an enemy there was one from the Night deck adjacent to me who happened to be a Demonic Enemy and I had a card to let me auto-win that encounter.) and a really bad luck sequence (facing the Archfiend at the end, his 12 health to my 8 health…but I was rolling 8 dice per attack versus his 5 per attack. I dealt 6 damage before he finished me off…) and while those might seem to balance out over the course of a game, losing to a string of poor luck is definitely worse than winning because of unusual luck.

Gloom of Kilforth is a game this ticks many boxes in the fantasy adventure genre that I generally enjoy. It has some character growth and progression. It has a sense of exploration as you move around the map. It has a limitation of the number of actions you can complete in a round. Multiple ways to approach problems. Relatively high difficulty level in a solitaire experience. All topped off by some of the most incredible artwork on the market.

So what is it about Gloom of Kilforth that hasn’t won me over to its side? I’ve given a lot of thought about this question because it has been nagging me. There is a lot about it that I should like and enjoy. And I think I’ve narrowed it down to three things that have worked together to prevent me from loving this game:

Progressing in the Story requires collecting keywords.
There are inadequate rewards for completing encounters – they don’t make you stronger unless you’re collecting the right keywords.
The game is brutal and punishing and feels downright impossible when combined with the other two points above.

This game wants to be played more, and with more plays I might discover some emergent strategies and tactics that can work to overcome those more often than not. So far I haven’t found them and, short of looking through each deck to see the distribution of keywords (so I can know where to “focus” if looking for a specific keyword), I don’t see much hope of reducing that random element. However, I can hopefully find ways to improve my play style and become effective enough to overcome that random element and the digging process when things go slowly. Learning what reward types to take, and when to choose gold or a draw from the bag, and those finer points will all help me to get better at playing. And my hope remains that, with time and more plays, some of these sticking points will fade away and allow me to love this game like it deserves. Because I can see the great fun to be had in this game – I just haven’t arrived at the point where its strengths outweigh these initial problem areas.